Aight, so bad news to everyone who is reading this.
Lorfafa and its residents weren't saved for some reason, so I'm gonna see about trying to get them back.
This time im going to use a different biome, a rather leafy and shady one.
I hatched some norns already an they look like this: 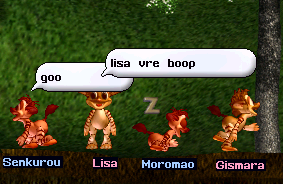 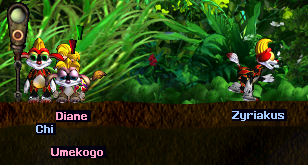 And also, I added something special, colored Magmas!
Theres a lot of them, but Tadzu seems to be the outcast. 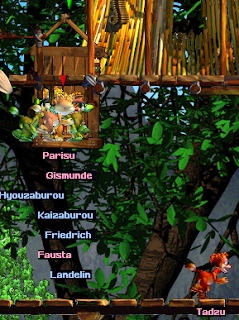 As I was watching the norns I noticed that there were 4 eggs laying near a tree, I decided to put them in my inventory as to not distract the young norns. Of course, the young norns who seem to really like the elevator, I had to get something to distract them and still there where 3 norns still on the ride! Other tourist attactions are eating at the honey combs, and crowding with friends. One of the norns was playing the melodical harp and it lulled other norns near the bar to fall asleep. Also I noticed that only  2 people seem to like hiding in the corners of this meta-room, might wanna check that off later. I aged all the norns to teen, so far nothings happening, however I did find one of my norns became a coffee addict.
Thats enough for today!
Anyways, I hope you enjoyed it.
at September 24, 2019 No comments:

A warm, nice place, with ripe fruit that tastes like heaven. Filled with neat little toys and many little gadgets that any life-form could subside with. That is the definition of Forfafa, a world with infinite possibilitys.
We notice here in this world that 4 eggs are scattered about. Each are soon to hatch. Not so suddenly,

A little boy named Oya was born into a lush garden, filled with many things to discover. Oya looks around, and finds a little toy to play around with. His face is filled with splendor as he looks and plays with a newly painted object for the first time in his short amount of time being alive. He continues off into the garden, discovering a source of refreshment. He stepped back, as he was astonished at the machine, and soon kept dispensing water. Eventually, the dispenser bored him and he went back to hitting his new toy. Meanwhile, near the ocean,

Another norn was born, named Yufuko, this little girl is already destined to travel. The salty breeze excites her, so she decides going up this elevator will surely bring her up into a nice view. For a split moment, she could surely see the view. She headed up into the tree house, with the ancient ticking clock. She picked up a piece of cheese close to the elevator and ate it, while at the same time also going towards a red and white ball, which looked slightly similar to her. At the same exact time,

A norn named Dietmunda immediately teleported near the hatchery. She went near the closest source of fun; a little bed toy and some cheese left around. She was really fond of this sleepy toy, and gave a cute little smile whenever she saw it. She immediately caught her eye on the computer in the hatchery, a mysterious force activated it for her, teaching her words that she would need to learn. Another head popped up,

A little boy named Utemaro was the last norn to hatch from an egg. Immediately he began pushing the elevator wanting to get sunlight on the top floor. He went over to the pile of leftover coconuts and began scavaging through them to eat. The island he is on has only coconuts,carrots, and a dangerous weed. Utemaro noticed this weed and ate it. The weed gave him a virus known as Histamine A, and wouldn't you know it Fever Toxin which is very deadly in some circumstances.

Suddenly, unknown forces showed up and dropped something off for the sickly norn. The object was particularly yellow and round, but Utemaro didn't mind eating something that looked similar to him. Dietmunda fell asleep while listening to the computer ramble on about hateing and likeing, she had a great nap. After her nap she began portal hopping, which probably caught Oya's eye.

(If you're wondering why Oya and Dietmunda look strange, they use a custom genome built by me. If you want use this genome in your game go here)
at September 10, 2019 No comments:

Hi there! Im KiwiNorn, and I especially like the series Creatures. I think that there really should be some more stuff for the series, because it deserves a lot more fans and more third party software. Honestly I wish there were more games in the series, simply because Creatures is just that great!

Honestly if I were to rank the best game out of the whole series, I may say "Creatures Village!" or "Creatures Exodus!" because those are some of the best. I would rank CV a solid 7/10 while exodus 6/10 (I would say Exodus has more bugs than CV).

Sorry for the very simple short sentences, but if you would like to download DS you can! Its completely free! 😺

Aight, so bad news to everyone who is reading this. Lorfafa and its residents weren't saved for some reason, so I'm gonna see abo...